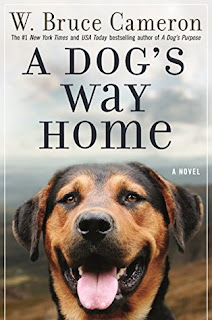 And then there was a blur of motion from above me and another animal joined the melee, landing right in front of my assailants. The coyotes were snarling and yelping in shock and fear and falling away from a ferocious attack. I stared in amazement as an enormous cat, far larger than I, sprang at the coyotes with nearly blinding speed, claws slashing. Her massive paw struck the bolder on in his haunches and sent him tumbling, and then the three of them were fleeing down the hill in panic, the cat loping easily after them for just a moment before she turned and stared at me.

What an amazing and beautiful story of Bella, a dog who once lived under a house with her mom and siblings, tons of stray cats, and one pregnant cat. When her dog family was taken away, along with many of the stray cats that lived under the abandoned house, it was the cat who gave birth that later became Bella’s cat mom. When the mother cat’s kittens were taken away, Bella and her cat mom were left alone in the dark crawl space under the house.

This story is about the strength of one puppy named Bella, a puppy that was saved by Lucas – the young man who put out food and water for the stray cats that lived under the abandoned house across from his building. Lucas fought for the rights of those cats against a nasty land developer and saved a dog from a mean dog-catcher. After Lucas had to re-home Bella to another state, a place where she ran away from, the love that Lucas gave was Bella’s guide through over 400 miles of adventures back to her home and the one person that meant the world to her.

W. Bruce Cameron has a knack for grabbing the reader, making them a part of the action, and leaving an emotional impact on anyone who picks up his books. This book is one of his best yet. Through laughter, tears, and sitting on the edge of my seat, Cameron gave me the gift of knowing Bella, feeling the love she had to give, and the light that emotional supports have for healing the darkness embedded within another breathing being. This book is an eye-opener for those who have never felt the power of an animal’s love, and a dedication to those who love their animals fully. A Dog's Way Home is a winner!

From Beyond My Bookshelf

View all my reviews
Posted by Unknown at 3:08 pm