Book Review: I Am The Messenger by Markus Zusak 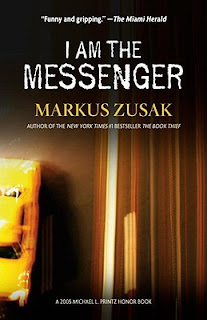 Maybe everyone can live beyond what they're capable of.

In walks Ed Kennedy. He's a 19 yr old underage cab driver in an Australian small town. He's a loser with less than impeccable friends. He reads a lot, has no goals in life, is bad at sex, and good at foiling a bank robbery with his overly talkative buddy, Marv.

The Doorman is pretty important to Ed. Not the guy who holds doors open; it's the name of his 17 yr old dog that means the world to him. Almost as important as his best friend, Audrey - who he is completely head-over-heels in love with. Too bad she is into having sex without love, and Ed does not fit into her line of detached relations.

Not long after the hilarious bank robbery, Ed receives his first card in the mail - the Ace of Diamonds. Three addresses are listed on it. What is in store at each place? It is up to Ed to figure out what is going on and how to deal with it. After finishing off one card, the next Ace shows up. It's Ed who holds people's lives in his hands.

While making moves with the cards he's dealt, Ed is learning to do that in his own life. He has a rather difficult relationship with his mother, and he has no idea why it is the way it is.

Two other quotes that made a huge impact on the story with me are:


Carefully no, her statement comes out. "Believe it or not - it takes a lot of love to hate you like this."

I love that old woman's smile. I love the patches of human wrinkles on her face ad the joy in her eyes.

I absolutely loved this book from beginning to end. I smiled, laughed, and teared up, too. This is my second of Zusak's books and I must say it reaches the level I expect after reading The Book Thief. Completely different but in no way lacking the poetic, genuine, and well-paced words that Markus Zusak is well-known for. This book has earned a spot on my favourites shelf, and I look forward to many re-reads to come.

From just Beyond My Bookshelf

Posted by Unknown at 5:36 pm No comments: